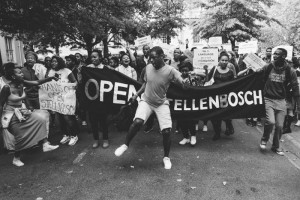 FeesMustFall is a student led protest movement that began in mid October 2015 in response to an increase in fees at South African universities. The protests also called for higher wages for low earning university staff who worked for private contractors such as cleaning services and campus security and for them to be employed directly by universities. Protests started at the University of Witwatersrand and spread to the University of Cape Town and Rhodes University before rapidly spreading to other universities across the country.

Photographs and film will be displayed & screened at the exhibition. There will be Platform of engagement and questioning.